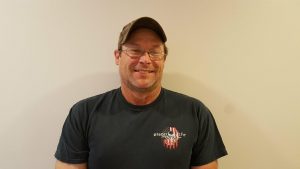 When Doug K started out as a Waller driver, he had years of experience behind him.

“I drove a dump truck early on,” Doug said, “And a factory for four or five years before that and decided that that just wasn’t me.”

Working a traditional 9-5 job just wasn’t for Doug, so he turned to driving. “I didn’t like being inside. I drove dump trucks, lowboys, end-dumps, belly-dumps, whatever they had.”

Doug has been driving now for longer than he can remember. He guesses that it must be around 20 plus years since his early days in a truck.

When asked why he started driving, Doug laughed and gave a familiar response.

Doug said, “It’s in my family. My older brother did it, my great grandpa did it. Either that or be a farmer and I figured there was more money in driving than in farming.”

To Doug, the best part of driving is doing the job right. “The best part for me is helping the customer, or doing something that they think can’t be done,” Doug said. “Everybody’s happy when it’s all said and done.”

When Doug first started working for Waller, he drove OTR — “from six months to a year,” Doug thinks — then had a family crisis that required that he be nearer to home. Doug then went from Waller to driving dump trucks for a different company, then moved on to drive construction again for five years.

“After that I came back to Waller and never looked back,” Doug said.

Doug first came to Waller after his friend referred him to the company. “I had a friend of mine who worked there and he really liked it,” Doug said. “He told me to give it a shot. I always wanted to try OTR, so I figured, ‘What the heck?’ And I liked it.”

Now that Doug is an RDC driver, he can spend more time doing what he loves and being there for his family at the same time. “I like being at home at night, Doug said. “A lot of it boils down to being around my family…I don’t want to miss out on anything that happens with them.”

Doug knows how companies stack up against each other now that he has two decades of driving under his belt. He said about Waller: “They’ve always helped me out. If I had something come up in the middle of the night, I’d call Eddie [my dispatcher] and he’d say ‘Don’t worry about it, it’s covered.’ I would say it’s one of the best places to work. I haven’t ever been at a place that cares so much about its drivers.”